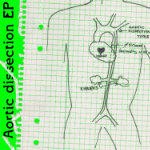 Tells the story about aortic dissection and ends with a short instrumental “song” called Retarded fury.

I was sent to the hospital immediately
for further tests and medication
Later that evening I was released
but a deeper investigation was started
After a few weeks I was put
into an X-ray computer tomography
to check my renal artery.
If the renal artery are too narrow
the kidneys will tell the body
to raise the blood pressure,
which could explain my state.

There was nothing wrong with my renal artery
but they saw something else on the images.
The innermost layer of the aorta was torn away
drifting loose in the middle of the vessel.
All personnel became quiet and nervous
asking if I felt pain or dizzy or strange.
I said that I felt good and wanted to go home,
but they didn’t let me in many days.

Then my wife remembered an episode ten months before.
That was it.
What I had assumed
was a serious case of lumbago
was in fact aortic dissection.